NASCAR Experience: 3 Lap Ride Along On The Las Vegas Speedway

Do you feel the need for speed? Do you dream of being Cole Trickle? (Or are you just a Tom Cruise fan? :))

Well, if all of the above satisfies you; you can feel the thrill of being at 200 miles per hour in a NASCAR experience that is held at 20 locations across the United States.

The Richard Petty Driving Experience offers a variety of NASCAR experiences from Ride Alongs to Self Driving. If you are wanting to drive a racecar, or just be driven around at top speed in one, you need not look further than this!

Whilst prices and experiences differ depending on the location, The Las Vegas Speedway, where I had my Ride Along offers many exciting NASCAR and even Indycar experiences for all to enjoy.

3 lap Ride Along’s are $109US, whilst an 8 lap Self Drive Rookie Experience will set you back $299US. All experiences include complimentary pick up and drop off to Las Vegas hotels.

Before doing this, my only experience with a racing car was watching ‘Days of Thunder’. I have however, always loved the sound of a NASCAR engine revving and racing around the racetrack. This moment was 20 years in the making, and here I was finally doing it!

I had a reserved time for 10:30am, with my pick up from my hotel, Treasure Island at around 9:15am. The pick up service was fantastic, and everyone in my van became acquainted, making it a more exciting experience for someone doing it on their own.

There are always Australian’s wherever I go, and this time was no different with 3 Aussie men in their 40s doing Ride Alongs like me.

When the van dropped us at the Las Vegas Speedway, we were taken through a corridor that had photos of the many celebrities who had also visited and completed either a Ride Along or Self Drive. So that was pretty cool to see. Patrick Dempsey, the rev-head he is was naturally on the wall. 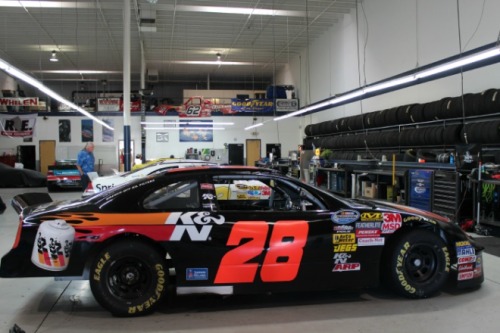 We were also taken into a workshop area where some cars were, and this allowed the first opportunity to get up close and personal with the race cars. Being able to look inside the car was really cool as you had time to really look at it. There were also a lot of tires on racks, so that really gave us a workshop feel.

It was nice to start the whole experience here before heading to the actual drive portion of the day.

Suiting Up At Las Vegas Speedway

People doing the Self Drive were separated from the group and would begin their driver training before heading out to the track to learn how to drive a NASCAR. The rest of us, which was majority of the people in the group were taken to the pit area where we were suited up in racing attire, helmets and all. This was fun, except my helmet was so tight my cheeks were pushed out of it and I looked like I had a mouth full of marshmallows as the photo below attests. It made for such an attractive look! But hey, safety first!

Then it was each person’s turn to ride in one of the race cars. It took about half an hour for my turn as I was in the second group, but being out on the track, listening to the roar of the race cars was something I will never grow tired of. I enjoyed every second of that wait-even in the stifling heat.

When my turn finally arrived, a brace type thing was put on my shoulders by one person (as the photo below shows), and then I was helped into the car by the another. My driver was already waiting for me to get in, once the previous person was helped out of it.

Getting into the car was a little tricky, but there is a ledge that’s on the car to hold onto, and you enter the car using your left leg. One you have your leg on the floor of the car, you slide the rest of your body inside and land your butt on the seat. Once you are in its all good. After a photo and a handshake from the driver, the fun begins!

The 3 laps around the Las Vegas Speedway didn’t take long to do, but it wasn’t over as quickly as I thought it would be, which was good.

The G-Force on the track does hit you though, especially around the curve of the track, so I recommend looking at something in the distance so that you don’t feel as queasy when it hits you.

Racing along the straight was fantastic and I loved every minute of that part! Such an adrenaline rush!

Whilst you are in the car, there is a camera recording your drive which you can purchase the digital copy on USB as a keepsake, as well as the photo that was taken when you got in. The video is well worth the money for that, which was around $50US.

Screenshoting the video doesn’t offer the best photo quality, but the photos give you an idea of not only what the video looks like, but what the ride was like when it happened, so hopefully you enjoy the photos.

Afterwards, I did feel a little queasy, but it was also a really hot day so that didn’t help things. After drinking water though, i began to feel better, and since we had to wait for the people after me to have their rides, i did have time to sit and relax.

Before being taken back to the Strip and our hotels, we were taken to the NASCAR store for about 15 minutes. This was good because it allows you to buy merchandise for yourself or others.

The drop off to the hotel was easy. It was about 1:30pm when we returned from memory.

Would I do this again? For sure! I loved it, and it was the best introduction into the world of NASCAR racing I could have wanted.

Now that I know what 200 miles per hour feels like, I will be doing the 8 lap Rookie Experience next time, so I know what it feels like to actually drive one of these babies. I will really be living the Cole Trickle life then!

Regardless of what you choose, you will not be disappointed with the NASCAR experiences offered by Richard Petty, no matter what race track you are using.

What a rush it is!