Bryan Adams: Why He Is One Of The Greatest Musicians Of All Time

There are some musicians who SHOULD be seen live in concert.

With the likes of Beyoncé, P!nk and U2 continuing to be worth the pennies paid to see them in the flesh; many forget about the musicians who have truly stood the test of time…well 30 long years (which is pretty much a lifetime in this industry!); far surpassing majority of musicians that are around today. (Yes, even Queen B herself!)

Bryan Adams has been around for so long that many people really underestimate just how good he is. He is a performer who has racked up one of the biggest catalogs in music today, his songs are household names that anyone born in the past 50 years knows the words to (even Grandma!), and above all else: he is STILL here touring the world!

Now I can take the heat for saying it, but how many of the musicians we know of today can even hold a candle to this man? People who do not have a body of work like he does or the longevity that he has managed to hold on to. Yes, their concerts may be good, but you have never seen a performer until you have seen Bryan Adams in concert. You can trust me on that!

When I first fell in love with Bryan Adams

I have LOVED this guy for decades! I was lucky enough to see him in concert when he toured in Australia in the mid 2000s. That concert was hands down the BEST I have ever been to, simply because Bryan did not STOP performing! He sung every song we ever heard of and more, and never took a break the whole time he was on stage, which was well over 2 and a half HOURS! We sure got our money’s worth that night!

When his London concerts were announced, I was desperate to go but wasn’t sure if I would still be here. Once I knew I would be…those tickets were bought for me and a Canadian friend (who was also a massive fan!) and we were literally on countdown mode for months!

In the lead up, I listened to all my favourite Bryan Adams songs, (‘Straight From The Heart’, ‘Heaven’, ’18 Till I Die’, ‘Somebody’ and ‘It’s Only Love’, especially); I watched countless YouTube clips of his concerts that I actually have them memorized now and basically re-visited my youth and adulthood (and all of the memories that came with it), listening to all of this for months. Hell, I am even listening to him now as I type this!

One of my most poignant memories growing up was when I was beginning high school in 1997, which in Australia is 7th Grade. I was in love with the song ‘Back To You’ that had just been released and bought the album ‘Bryan Adams: MTV Unplugged’ as I loved all of his songs, so I knew it would be good.

What I didn’t expect was for this very album to become my favourite album of all time. Still to this day, (and many have tried and failed to topple this-yes you T. Swift) I can never get bored with this album. I used to listen to it as I fell asleep, playing softly on my CD player, which my dad would turn off when he went to bed. It was completely soothing to me listening to this and even now, looking back; I can see that bedroom as it was (and no longer exists) and what I was feeling listening to this music. How many albums can take you so visually back into time like that? It is a wonderful album with acoustics, wind instruments and a classical touch here and there, complemented with Bryan’s husky voice. Completely stripped down versions…but honestly beautiful the entire time.

The Bryan Adams concert at Wembley was going to be an amazing event purely because of the location. Forget massive stadiums, and sitting in the nose-bleeds. This venue was intimate and even though we were at the opposite end of the arena, we had a perfect view and were right in the action the entire time. Wembley was also the first venue Bryan Adams played in London when he toured with Tina Turner back in 1985, so it was awesome to know it meant a lot to him too.

This tour was in celebration of the 30th anniversary of his first album ‘Reckless’ which has some amazing songs on it! When I realised just how long ago these songs were released and the fact I am 29 right now, it made me feel way OLD. But it also proved to me that the belief I had about Bryan Adams was ringing true even today. His songs were still finding new audiences. People are still listening to him. They share this music with their children because it is still GOOD.

The concert began at 8pm and consisted of over 2 hours of rock that any fan could ask for. The first half of the concert were all of the songs from the ”Reckless’ album which were some of his most well known (‘Heaven’, ‘Run To You’, ‘Somebody’…and the most EPIC rendition of ‘Summer Of 69’ I have ever heard (It got the civilised Brits on their feet!)) This had the crowd right into it, right from the very start, especially with ‘One Night Love Affair’ and ‘It’s Only Love’ and those guitar riffs! Just amazing to listen to!

Then came the other hits! Notably, ‘Can’t Stop This Thing We Started’ (it has to be my favourite song for sure!), ’18 Till I Die’, ‘The Only Thing That Looks Good On Me (Is You)’, and ‘Straight From The Heart’ to name but a few.

My friend Kristal and I, as uber fans as we are, could not believe how MANY songs he has that are just AWESOME! Hearing them all stacked up against each other really reminded us of why we love him, and how amazing a musician he is in comparison to others. He really has a massive catalog; and this was just one more reminder for why seeing him in concert is just a brilliant experience!

A woman came on and sang the ‘When You’re Gone’ duet with him which was a charity prize she paid £10,000 to do. She was really good! It is really nice that he uses the duet as a charity item, which shows the type of person Bryan Adams is. That would be a money can’t buy experience for sure though! 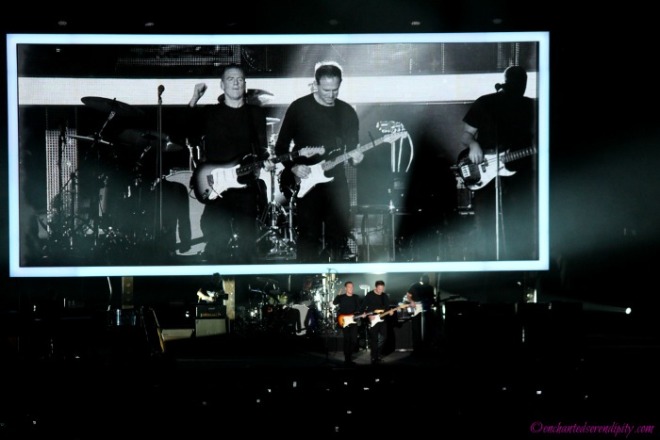 I have always especially loved his long-lasting friendship with lead guitarist Keith Scott-what an AMAZING talent that man has! I recorded his guitar solo of ‘It’s Only Love’ and still listen to it a week later. It is just EPIC!

The finale had Adams on his own, singing ‘All For Love’ with an acoustic guitar. It was spine-tingling in large part due to the atmosphere of everyone in the crowd holding up their phones and lighting up the arena. It was truly beautiful. I was sad to see the evening end.

Bryan Adams is a musical genius. I will never be sick of listening to his music and seeing him in concert.

He may be under the radar in comparison to other acts, but he will outlast many of them, even in the next decade. Brilliance does not end.

If he tours again, do yourself a favour and get your butt to a show. Hearing these songs live is something else. The guitar riffs are beautiful to listen to in themselves.

Bryan Adams has given me a lot: music to listen to, a love for Canada and inspiration to do what you love doing.

But even more importantly, he has given me the soundtrack to my life and some bloody beautiful memories.

Keep on Rockin’ BA! May it never end.