The Pros & Cons Of Flying With Southwest Airlines

This post has been updated as of March 22, 2019, following my 9th trip to the USA in 10 years. My thoughts on Southwest still remain the same as they were in 2015. They are the best value airline in the USA. If you are visiting the US or Canada be sure to join my growing travel community USA & Canada Travel Planning.

There is so much choice when flying within the United States. Too much at times.

Whilst Southwest don’t fly to every city in the USA, you can manage to get to most places (if not direct), with only one stopover – and it will still be cheaper than flying with other airlines on a direct or non-direct route. (Plus layover’s aren’t so bad in the USA – they’re far more interesting than any domestic airports in other countries.)

But what are Southwest like to fly with? What are the pros and cons of Southwest? Are they worth it? Is flying a budget airline worth the lesser price?

Read on to see why Southwest are the best airline in the US – and why you should be flying Southwest whenever you fly domestically in the US.

Why Fly Southwest? Their “Wanna Get Away” Fares

Southwest have really good standard fares. Their ‘Wanna Get Away’ fare is a fare that is always so much cheaper than all other airlines…and if you book early enough, you can get a seat for the best time to fly – at a sale price. You can even fly direct with them, even if there are limited flights between point A and point B.

Southwest have other fares, “Anytime” and “Business Select” which are also fine options too. For seniors, they also have “Senior Fares” too.

So how do all of Southwest’s ticket types work?

These fares are the most expensive, but they have a lot of benefit in booking them if you have to.

*You automatically gain priority boarding in group A1-15.

*You can gain Rapid Reward Points With Southwest.

*You will receive a premium drink on your day of travel.

*Your ticket can be be refunded and changed without penalty, or used towards another flight at any time.

*Standby travel is permitted for the same city pairs on the same day of travel for no change in fare. But taxes or fees associated with standby travel will be charged per passenger.

Unlike other airlines, Southwest DO NOT allocate seats on their flights, but if you pay $15 USD, you’ll be one of the first to board because you’ll be automatically checked in for the A boarding group 24 hours before your flight. If you want to check in yourself, the minute your flight time hits 24 hours before departure, you can check in and you’ll at worst, be in the B group if there are A, B and C groupings on the flight.

I never pay the $15 personally. I have never had a problem with boarding, or sitting with friends or family. But I always check in the minute the flight check-in opens. If you know you won’t have wifi or won’t be able to check-in when it opens, I would recommend paying the $15 so you aren’t allocated to Group C.

How Do You Board A Southwest Flight?

For Southwest you will have a Letter – A, B or C and a number between 1 and 60 on your ticket.

Once any pre-boarding groups – military, priority boarding, families have boarded the plane:
–Group A 1 – 60 board first. These passengers generally seat themselves in the aisle or window seats – leaving the middle seat vacant on either side the whole plane along. This occurs if people are traveling alone, which a lot are; but 2 friends may also do this to give themselves space – in the hope no one else sits there!
–Group B 1 – 60, board second. Passengers can generally find a row of 3 seats empty towards the back of the plane when boarding in this group – and secure that desired window or aisle seat. But, if you want to be at the front of the plane, then take a middle seat if those are filling up, and you will de-plane pretty quickly upon landing. You will have a middle seat though.
–Group C 1 – 60 – it depends on what number you are as to if you will get any choice besides middle seats. You may have to settle on a middle seat unfortunately. But it really depends how full your flight is and how many people are traveling together.

Still not convinced Southwest are the best value US airline? Read on to see why I love flying with them.

Most airlines charge $20-$25 USD for one checked bag, and $30 USD for a second – so already you are saving just by flying with them, even if another airline may have a similar fare price. One checked bag can’t weigh more than 50 pounds (23kgs) – but like all American airlines, your carry on bag (plus one personal item) just has to meet the size requirements, not weight. So passengers definitely get enough baggage allowance with Southwest – which is why things like this make them the best value airline in the US.

To some, no allocated seating would be an issue, as many people like choosing their own seats. Some people like sitting by the window, for the views. Others like sitting on the aisle so they can get up for the bathroom anytime.

For me, I like that Southwest have this process so you don’t have to worry about where you get placed. If you check-in right when 24 hours before your flight time arrives – you will generally be one of the first 120 people checking in (A and B Groups). If you pay $15 before your flight, you can purchase automatic check-in which will guarantee you a spot in the A Group at 1-15 usually. But I have never needed to use it and have never been forced to sit in a middle seat.

Even if I don’t check-in immediately, the worst I have gotten is in the last lot of B’s – and I still had a fine seat, as there were still some rows left with just one person in them. Because of this boarding process; if a flight isn’t full, passengers seem to spread themselves out a lot more for comfort, rather than other airlines that cram people together – so i perfer Southwest for this reason too.

3. Southwest Are Generous With Their On Board Snacks

Whether it is pretzels or biscuits or whatever else they have on offer (Southwest have now removed peanuts), Southwest will often enough give you both options! And, the cabin crew will usually come around for a second round depending on the flight time…who doesn’t love free food?! Soft drinks, water and tea and coffee are all complimentary too.

4. Southwest’s In Flight Entertainment Is FREE

Whilst you have to pay for wifi – though surely you can go a few hours without it; if you have a smartphone you can watch TV on your phone throughout the whole flight (if available).

There are a heap of cable channels to watch, but I stuck with the Food network on a flight from New York to St.Louis and I really enjoyed it. It made the flight a little more faster just having this option. These days you have to download the Southwest app before departing, but once you have it – you can access a lot of channels which is nice.

Southwest do sell additional items including alcohol, and on this particular flight we were asked if we wanted to try a sample of one of their beers, which majority of people did. 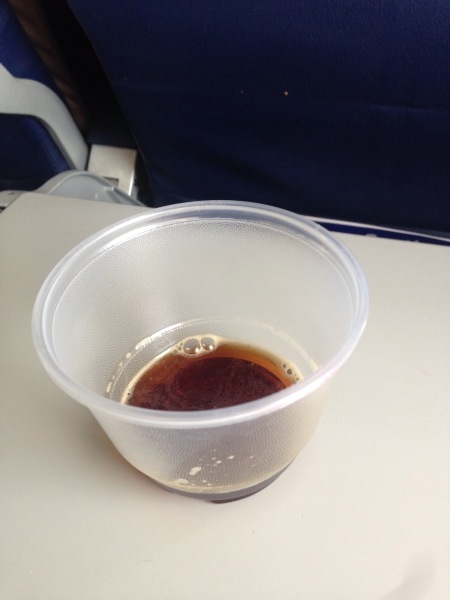 Southwest also give passengers free drink coupons in the mail which is great. My friend Vera gave me one to use last month – which is worth $7 USD – I had a Vodka Cranberry on my way to San Diego which was much enjoyed.

When I arrived back in Australia – I had mail from Southwest waiting for me funnily enough which consisted of 4 drink coupons valid for 1 year. So if I make it back to the States in the next year, I will be sure to use them or give them to friends. (You can give them to others to use too.)

Unlike some American airlines, Southwest cabin crew are lovely. I have never had a bad experience with them in over a decade. They help passengers board the plane given there are no seat allocations – on one flight we had a flight attendant advise us to find someone we liked, and sit next to them so we could “meet them” – which shows their humour when a flight is full.

Cabin crew are just in general happy to assist, which is fantastic given this is a budget airline. Passengers are not treated like budget travelers, unlike some budget airlines in the world I have traveled on.

Final Thoughts On Flying With Southwest

Southwest will always be my go-to airline. They are value for money, and their flights are always pleasant. All of this is exactly what you want in an airline. They are the best value American airline price and baggage wise, and are favoured by many Americans as well as international visitors for these reasons.

Do not hesitate to book your next holiday with them. I never regret flying with Southwest.

Don’t forget, if you wish to join my US and Canada travel community, click here to join.

Pin This For Your Next US Adventure!