My US State Quarters Collection 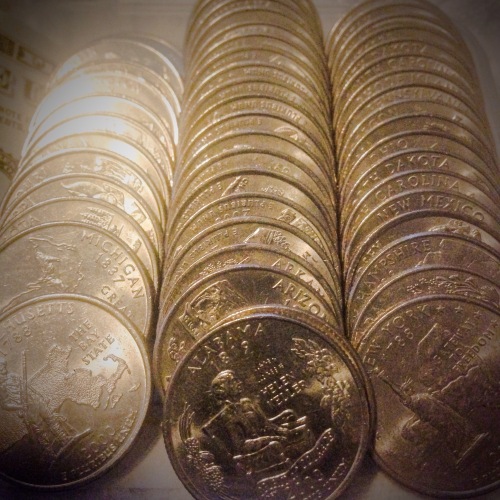 Ever since my first trip to the USA in 2008, I started collecting the U.S. state quarters that they had in rotation.

With every trip back, I tried to collect more and more, swapping people for ones they had that I needed for normal quarters that I had in my purse. It was a trek I took every time I bought something from a store.

Finally in 2011, I managed to get all of them. The reason it took me a few years was because a) I don’t live in the states and b) some states were not released/had just been released and there were not enough of them out there for me to track down in a few weeks of being there.

But finally, I had found them all after 2 trips over totaling 6 months or so-(due to working at Summer camp), which is a pretty amazing effort for a foreigner!

I am actually planning on writing a post on these coins and what they look like, just because they are really cool! (Hey! Ryan Gosling’s character had the 50 coin bears in ‘Crazy, Stupid, Love’, so it is!) But today it was awesome just to dig them out and have a look.

I have a heap of old U.S. coins, some from the 40s and later which are no longer used; though they are not in pristine condition, they are cool to look at. I love collecting coins from other countries, but especially from The States.

Having collected these quarters though; now, that was a labor of love that I persevered with until I finally found Alaska somewhere in Yellowstone National Park before I saw Old Faithful. The last one I bloody needed that took forever to find!

I still remember the moment I found it, because as it sat in my hand I knew I had it. I turned it over and there it was!

What an awesome day it was!

3 years in the making.